During a school field trip five teenagers find five crystals, they then harness the powers of gems and now have to defend earth from the Wendigo Army. 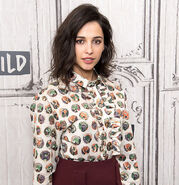 Add a photo to this gallery
Retrieved from "https://powerrangersfanon.fandom.com/wiki/Power_Rangers_Spirit_Gems_(AnimeLover569)?oldid=412451"
Community content is available under CC-BY-SA unless otherwise noted.