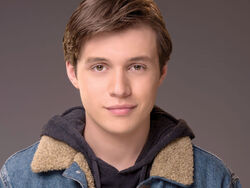 Drake Langston, born Kyan is Mage Racer Silver, the 6th ranger and Silver Ranger of the Mage Race Rangers. He is also the younger brother of Princess Crystia, the son of King Gemasto, and the nephew of Dark Moon.

Drake is shown to be rather carefree about most things, to a point where it is a wonder if he takes anything seriously. However, he shows a more serious side when in battle or in front of his sister. He is also a very strong and capable fighter.

Assumedly due to his alien origin, Drake is shown to be much stronger than most humans. Most notably, he is able to effortlessly carry an injured Kayla on his back and was able to stop two speeding dump trucks with his bare hands.

After being merged by the Dark Monstone, he was brainwashed into the evil ranger form called Shade Racer Silver. The suit is the same except it has red eyes on the visor and a black sash.

Mage Racer Silver can also change into a Magine Stone. Known as the Kyanite Magine Stone, in this form, he can combine with the Mage Driller Zord into the Mage Drill Megazord, which essentially gives his mind a bigger body to control.

Drake is portrayed by Nick Robinson.

Retrieved from "https://powerrangersfanon.fandom.com/wiki/Drake_Langston?oldid=451721"
Community content is available under CC-BY-SA unless otherwise noted.