The Celestials Weapons are incredibly powerful weapons in The Grid Series that were guarded and used by Divine Celestials, only four beings had the ability to make these weapons: The Creator, Orphan, Yahweh and Samael.

The Divine Swords were unique Primordial Celestial Weapons that took the form of a sword, there were Seven notable swords, although there were believed to be considerably more. The power of these Blades made even Celestials quiver, Archangels even fled before their wrath and their combined power with their chose wielder, these blades could easily reap souls or absorb even the strongest of energies. The Noted Swords are: 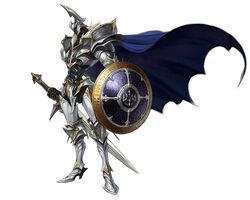 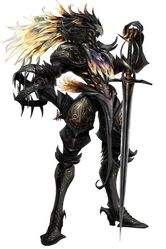 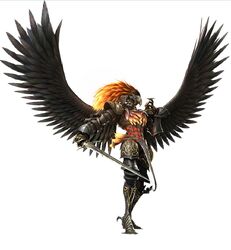 The Death Knight with Wings extended 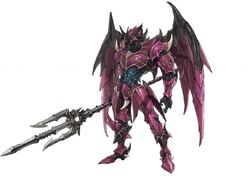 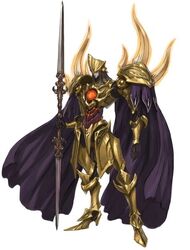 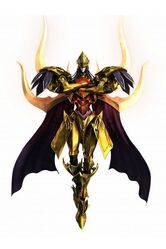 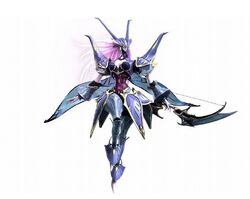 The Angelic Princess
Add a photo to this gallery

The Staff of the Sun

Also known as the "Staff of God" or the "Staff of Moses", is a powerful Celestial Weapon crafted as the "Staff of Leadership" by The Creator and Orphan which it was wielded by Orphan during the meeting of the Ruling Council or Conclave except on the off chance that the Creator instead appeared at the Meeting, in the hands of the Creator or Orphan its powers were described as infinite and it acted as both a conduit and a booster for their own powers.

It was always stored in Orphan's Grace when unused therefore there was no need for Orphan to steal the weapon as he did with the others, Orphan even allowed Moses to supposedly wield it, if briefly. Its easily accessed powers allows a human or Celestial to generate and inflict any one of the Ten Egyptian plagues, its power can easily harm humans and damage Celestials inside vessels, when being wielded by Divine Celestials it can increase their powers by channelling it at a high level of control - notable enhances indirect powers like Telekinesis, Holy White Light, Weather Control, Teleportation and other mental based powers.

If the weapon is not wielded by Orphan but is instead taken from him, he has been proven of stopping its power dead in its tracks and even "pulling the plug" on its power, this is because the Weapon's power is tied directly to Orphan's Grace because it only recognises Orphan and The Creator as its true Masters. Also, it is revealed that The Orphan's gear was shaped off the Staff's head, making the reason Satanail takes that form because of the weapon being his inspiration. The Staff could be used to summon and either become or control the Extant Knight, the Staff is the oldest sibling of three Celestial Weapons that can only belong to the Grace of one Celestial unless it is "borrowed out" temporarily.

The Mask of the Creator

The Mask of the Creator was a powerful Celestial Weapon that when worn allowed the user to predict the moves of enemies as well as to enhance the Telekinetic Abilities of the user, it also strengthened the abilities of Light and Fire, it and its sibling weapons can only belong to the Grace of its user although it can be "borrowed" out to other individuals. If the Sentinel Seal were removed on this Relic the Divine Celestial would take the form of the Sun King.

The Sword of the Destroyer

The Sword of the Destroyer was a Celestial Weapon originally wielded by Samael that has the capability of summoning and controlling armies of a billion Daimon with ease, it was one of the only weapons outside of the Divine Swords that could kill a Reaper with ease and if it were to channel enough spiritual energy through it it could create a blast equivalent to a nuclear bomb, it gave Humans a number of Abilities based of Daimon abilities similar to those awakened within Zodiark by Beelzebub. It has the capability of summoning and controlling the Death Knight, it is currently in the hands of Luther whom summons or uses it to fight the Rangers Zords with dazzling successes.

The Arrow of Heaven

The Arrow of Heaven was revealed to be a mysterious Bow that created an energy arrow out of excess energy including Spiritual or Celestial Energies, the arrow was so powerful that no shield except the Shield of Assiah could defend against it, with enough power the arrow could cause an entire battleship to explode and destroy the Vessel of Celestials however the injuries on some of the oldest Divine Celestials' Vessels heal rather quickly. It and its sibling weapons can only belong to the Grace of its user although it can be "borrowed" out to other individuals, it could be used to summon and use/control the Angelic Princess.

The Belt of the Drake

The Belt of the Drake was worn by Leviathan and was revealed to be capable of summoning and controlling Dragons from beyond the Veil, like the Gauntlet of the Void it also increased the "Super powers" of the user: e.g. Super Strength and Super Speed, it also allowed them to take higher levels of damage and be able to heal from practically anything. Its final ability is the ability to "read" the hearts and intentions of other people, it and its sibling weapons can only belong to the Grace of its user although it can be "borrowed" out to other individuals. When its Sentinel Seal is broken, the user can summon and use/control a Sentinel, The Dragoon Knight.

The Gauntlet of the Void

A Gauntlet of similar power to the Belt of the Drake, the Gauntlet strengthens the "Super powers" of the User, it also allows the user to become an expert in the sword fighting arts. It and its sibling weapons can only belong to the Grace of its user although it can be "borrowed" out to other individuals, when its Sentinel Seal is broken the User can summon and use/control a Sentinel, The Void Knight.

Mace of the Void

The Mace of the Void is a powerful and deadly weapon created by Orphan during the Early Years of Existence; similar to his sword and the Staff of the Sun, it is a weapon that draws energy from everything that has lived, died or even existed. The Mace upon impacting does fifty times the destructive damage of any physical attack in existence, causing a blast of telekinetic energy equivalent to a Nuclear blast, in the hands of its creator it is said to be infinity more powerful.

The Celestial Keys are the Keys said to have been wielded by Archangel Michael or his Grid Series counterpart: Divine Celestial Mikhail, alone each Key can allow access to their User into their specified targets, together with a "load crap of power" they can allow their Users to open a massive portal into Paradise. The notable Keys and what they do include:

The Shield of Assiah

Little is known about the Shield of Assiah other than the fact that it is used in the Powerplant of the Chaos Shadow Zord and its divine power is used to create that Zord's Mirror Shields, the shield is said to be able to absorb or reflect any damage direct at the user and it is said to be impenetrable.

Known also as the "Celestial Cage", was an indestructible Magical Cage with its Assiah Entrance located at Zordon's Original Power Chamber, after the 4/4/2012 there would be a perfect alignment between the entrance of Luther's Cage and the planet Venus which was also known as the "Morningstar" for many years to come. A number of seals, much like locks had to be broken for Luther to be able to rise especially Seal No. 1 and No. 66. Despite the fact that there are 600 possible Seals, only 66 need to be broken, the known Seals (as decrypted through the ancient texts) are:

Once all seals are broken and the Cage opened on Earth, Luther's soul would burst out of the Cage as a Beam of Light and would combine with the Planet Venus' Core that had to be enhanced by the negation of Death in-order to contain the soul of Luther: It is written, so the Morningstar would glows bright in the Heavens above, brighter than all other stars. Luther's True Vessel (aka the Dark Knight), would then be brought to Venus where it would be thrown into the planet, where Luther would force them to say yes to his willing Celestial Possession.

These were five powerful tools that absorb excess Celestial Energy and condense it into its stone shape, there were capable of destroying armies of Celestials or Daimons and even taking out the Dark Lords in a single blast, the named Crystals were:

The Crystals also had the capability of rendering Free Will of countless people under the wielder's control and creating illusions like Doppelgängers, the wielders of these crystals could make or break Empires with ease, they eventually all come under the rule of Zodiark and later Orphan.

The Flames of Perdition became one of the most powerful weapons in Angelic History and was created by both Samael and Mikhail, although the weapon is considered basic in design making it unusable by anyone but its main user, its main user became Mikhail. The Flames of Perdition are capable of burning through the True Vessels of even the Sons of God, however only two of the aforementioned sons are harmed by this and only one of the sons has no defence knowledge against it: Yahweh, Samael helped create it and therefore knows how to deflect and dismiss its attack.

The only three people with known Immunity is the Creator, Orphan and Satanail, Satanail's Immunity only came to be when he was in the form of The Orphan. It seems that Orphan is immune to the effects, like the Creator, to all (or near all) the Celestial Weapons as Satanail brags through The Orphan.

Retrieved from "https://powerrangersfanon.fandom.com/wiki/Celestial_Weapons_(Grid_Series)?oldid=34674"
Community content is available under CC-BY-SA unless otherwise noted.