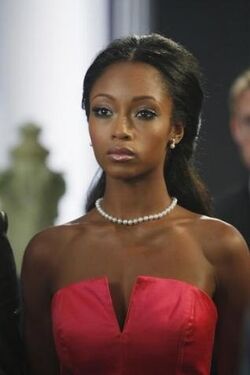 Alice is the Yellow Angel Force Ranger and the Gold Galactic Pirate Ranger.

Alice describes herself as a prodigy, which is the truth. She is a young genius who graduated from MIT with a Masters at the age of 18. She is from Angel Grove and was around during the events of Countdown to Destruction who was rescued by Ashley Hammond. Sine then, she's dreamed of becoming the Yellow Power Ranger.

Her dreams of becoming the Yellow Ranger is fulfilled after Thrax attacks the planet. Alpha 8 informs her that she has been chosen to be the Yellow Ranger, which she accepts with joy. She finally gets to use her technological knowledge and skill to assist Alpha in creating weapons to use against their enemies. While she isn't insecure with herself, her people skills aren't that great and she eventually falls for a trap set by Lightning, transporting her to a Wonderland-like place. Eventually, she is rescued by her fellow Rangers before Lightning has her head cut off.

Alice remains on the sidelines for most of the series, only stepping out when new technology is needed to battle evil. Landon's Eagle Armour is one example of the new weapons she creates that Alpha and Adam never thought possible. She does, however, act as the big sister for the other Rangers, watching over them as if they were her younger siblings.

Later on, Alice shares a romantic relationship with Landon that seems perfect from the starts.

However, the final battles come and their love life has to be put on hold in order to defeat the Dark Lords. They overcome Luther and Thrax, which leads to the Rangers being hospitalized. She is the one who is there to wake Landon up and show him what happened to the others after the fight. Alice is seen holding hands with Landon at the end of season one, their relationship obviously being back on.

Alice has Landon moves into her apartment and the two's relationship grows stronger during the time of peace. She continues her odd jobs, using her technological expertise to help everyone in Angel Grove. Later on, she works alongside Junior, Wes, and Eric Sr. to form a galactic police unit called S.P.D. However, S.P.D. is quickly used for ill means when Zodiark's empire begins to spread.

Alice does not join the Rangers right away, chosing to stay behind on Earth. She and Junior eventually severe their ties with S.P.D., while going into hiding due to their involvment. They will surface once more when Superior Red gives them the Silver and Gold Ranger Keys, allowing them to transform into Rangers once again. They reunite with their companions on Earth after their battles against Connor.

Retrieved from "https://powerrangersfanon.fandom.com/wiki/Alice_King_(Grid_Series)?oldid=97710"
Community content is available under CC-BY-SA unless otherwise noted.