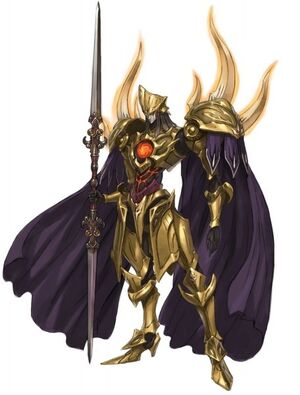 "Oh Adolmaea, shining sovereign, supreme light of the ancient skies, grant me your power. Vitae!"
—The Incantation needed to use the Seal on the Mask of the Creator to summon Adolmaea.

A Sentinel of extreme power and second only to the Extant Knight, the Sun King can be thought of as the Leader of the Sentinels, thus making him presumably the second most powerful of the Sentinels. It wields a Double-sword as a weapon. It can also make a see-through yellow energy shield, as well as float. It was originally wielded by Yahweh, for the second half of Angel Force (it is mentioned anyway) and the first half of Galactic Pirates it has fallen into the hands of Orphan's True Vessel: Zodiark, after Orphan's revival the Sun King is returned to Yahweh.

A Double-sword wielded by Adolmaea and the only physical weapon at its disposal, it can become encased in flames or return to flames from whence it came which is swung towards enemies, this weapon can also split into two swords which is used in concession with each other.

Like with the Celestial Ranking, Adolmaea is the second strongest Sentinel and falls under the control of the Second of God's Children: Yahweh, under Yahweh it is said that the enemies of the Creator suffered. Adolmaea is said to have indestructible armour, easily fending off any attack arrayed against it. 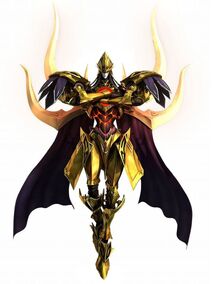 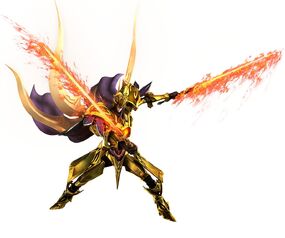 Adolmaea - Sol Cross ability
Add a photo to this gallery

Retrieved from "https://powerrangersfanon.fandom.com/wiki/Adolmaea_the_Sun_King_(Grid_Series)?oldid=40443"
Community content is available under CC-BY-SA unless otherwise noted.